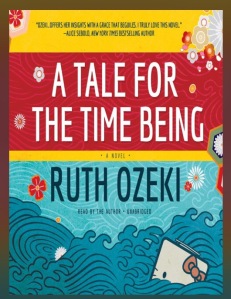 A Tale for the Time Being is a book for which I waited patiently through my library system. Just when I was about to surrender and pay for the book, the email of availability arrived from the library system. I savored it, in large gulps. I stopped, and started over, not wanting to reach the end.

Turns out I’ll end up buying this book anyway. While Mink River was my favorite book I heard in 2015, this is the top pick thus far for 2016. It is re-listening gold.

This past year I’ve wondered about the shifts in Japanese culture after WWII, curious for perspectives about the late-twentieth and early-twenty-first manifestations of an ancient culture and language after receiving atomic devastation. I’ve been curious about suicide, and hungry ghosts, and the practice of engaging with ancestry in a tangible way. Sky soldiers, kamikaze, conscripted philosophy students, the breadth of the Pacific, plastic garbage in the ocean, the image of gyres and incremental movement—I’m left with a taste of brine and oyster on my tongue that is both satisfying and has me simultaneously longing for more.

When an author is an excellent audiobook reader, as is Ruth Ozeki, the depth of communication is deep and nuanced. The use of music provides interludes, as literary arts begin more fully embracing a multimedia platform. 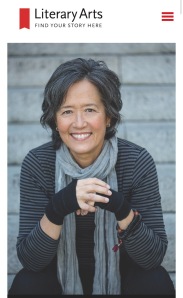 And speaking of literary arts, this lecture by Ozeki (the first 12 min are light/fun but also skippable) took place in 2015 at the Arlene Schnitzer concert hall in Portland, where I’ve heard some great music, including the 40th anniversary tour of Horses by Patti Smith, whose own authorship will be receiving an entry here in due course.

From Ozeki’s lecture at the Schnitz, I retain the image she offers of an alternative-to-western-culture notion of time, as understood by a Peruvian tribe: the past is in front of you, because you can see it. You can see your ancestors and from whence you came, and what has happened in your life. The future is behind you, unseen, unknown. And humans are time beings, swimming or sailing through currents of time. Quantum. Yes/and.